Finally put some more time into this guy. After finishing the helmet, I was a little daunted to work on the rest and make it all the same level of detail. As of now, I only have the armor to finish up and I will call him done.

He definitely stands out on a Super Dungeon Explore board when we play.
I shall make sure to update you as soon as he's all finished. Which I hope will be relatively soon.

Whats in the pipe?

Just thought I would show you guys a little update about what I hope to get started on over the winter months.

Of course, I will always have my standby figs that I work on. Which for the foreseeable future will be Wrath of Kings stuff. My group is also heavily contemplating getting into Guildball. Those figs are freakin sweet, we just need to find a good place to get them as we like to shop local first, if at all possible.

Now! On to the potential Queue. In no particular order.

First off would be the awesomeness that is DUST. I finally broke down and bought myself one of the heavy tanks. At first I really wanted the LongTom/ Mobile HQ. But the Bulldog was on sale for a screaming deal, so I got that instead.

I plan to do a bit of masking and striping on the hull, and then weather it up nice and rusty like the rest of my DUST allies.
Should be a fun and quick project.

I bought my first Bones figure to try out as well. I cant believe how bendy they are. I will be surprised if paint will stick at all! Will still try it once though.

For this next project, I will be going totally against the grain that is the norm for me.

Historical figures have always been on my Radar. I love the thought of massive battles, with rank upon rank of troops resplendent in their bright colors, with banners waving among the units.

To that end, I have gotten myself some figs to go in an English Civil war army. Specifically for the Parliaments forces. I had my mind made up to start a Royalist army, but I changed that mid purchase due to the awesome helmets the Parliamentarian forces wear.

A unit of 12 cavalry will be my start on this HUGE project.

Following that will be lots and lots of Malifaux. I bought in heavy and really love the figs. The game is a freakin blast as well, if not a touch complicated. I do hate to assemble the figs however. If you haven't had the displeasure of this experience before, watch out!

The figs are so tiny, and cut up into a million and a half different pieces. Some things such as beards and necklaces are separate pieces, requiring almost surgeon like steadiness to place properly!
I will persevere and see these on the paint bench soon!

The next thing is something I bought on Impulse. I have been a little jaded on Infinity since the move to 3rd edition and the complete re-sculpt of my army. It felt like a very GW thing to do and I haven't  really touched the game since.
My local shop got a bunch of the new starters in, and I got to see some of the new Morats first hand. They were really too cool looking to pass on......
So, I plan to get these assembled and perhaps that will rekindle the fire to learn the new edition and jump back into the game.

Here is what I have just primed up to start working on. The Wrath of Kings figs will see paint first, and then if I still feel like it, I'll move onto Jake Williams from Wil West Exodus.

Got this guy all finished up. He is my first completed Wrath of Kings fig. While I don't think I did a super stellar job, I think he'll do just fine for the table top.
I have since assembled his personal squad of Fel hammers, so he can run them to full effect.

This my next little Rackham, Tir-na-bor dwarf. I absolutely love painting these dudes! So much character and great, crisp detail. Only one more left to complete the squad of three Forge Guardians.
If you haven't ever had the pleasure or painting a Rackham figure, particularly a dwarf (undead or living) I would suggest scouring ebay to find some.

Not much more to say about this little guy. Thanks for checking him out.

The battle for Arikania rages!

Snapped just a few pictures of our league games last night, and thought I'd show all of you!

I of course, got absolutely smashed by an immovable block of Teknes baddies.
The good name of Nasier was not completely tarnished however, as one of our other players seems to be unstoppable with his.
Goristi faced off against Goritsi last night. From the profanities escaping that corner of the shop, it must have been a complete rout.
Shael Han had a slog of a battle against a another Teknes player, in which it seemed to come down to infantry just trading blows.

A fun night was had by all!

Here are the pics. Slowly more color creeps into our games.

Wrath of Kings Start and some Nasier

Way back when, I got on the Wrath of Kings kickstarter, as I'm sure a lot of you out there in the vast geekosphere did.

Well, I have recently decided I ought to start assembling, panting and playing with the monstrous horde of figs I received.

I pledged for the two faction bundle, and Got Goritsi, the vampire/ werewolves, fast and maneuverable faction.
I also got the Nasier which are the elemental mask wearing loonies. They value martial prowess above all else and hit like a Mac truck.
I decided the Nasier would be my main faction to start gaming with, and working on.

I went ahead and started a slow grow league so people in my area could learn the game at an easy pace, but also get up to full on battle size eventually to use all their goodies.
We are currently at week 3 and although the turnout hasn't been amazing, we are having a blast playing the game.

Okay, nuff said. lets see the WIP's!
I have started by trying to assembly line a 12 strong unit of the Pelegarths, and I've also gotten a good start on a rank 2 leader, Arkan Thesh.

Arkan ought be done very soon now. He is one of my favorite figs in the line. such a creepy vibe going on with him.

Here are the 12 Pelegarths. I always try to do assembly line....and then I realize...... I HATE ASSEMBLY LINE PAINTING!!

Here are a few pics from our first games. Love seeing the paint hit the table already. That's what these games are all about!

I snagged myself some of the Wargames Factory Skeletons the other day to use as randomly generated monsters for any games we may play, and to possibly use in a Necropolis army for Warlord.

the figs on the sprue look so nice, I thought Id show you what comes in the box.

30 hard plastic figs come in the box for about $20 USD! Deals don't get much better than that.

the Box art is really awful.....but maybe they wanted it to look like an old claymation film?....
it's whats inside that counts though, right? :)

Looks like every sprue is set up the same. 6 Skeletons with a variety of weapon options and shields.
Even some broken earth if you'd like your skeletons breaking out of the ground!

Here is a closeup of the actual skulls. Most skulls on the market are just to cartooney and blocky. I wanted something with a little more realism, as I plan to make a few green stuff press molds to add some skulls into my terrain and bases once in a while.

Here are the quivers and shields. I don't plan to equip any of my skellies with bows. That has always seemed like too complex a skill for simple undead creatures. Hacking and slashing with swords and spears, yes.......pulling an arrow, nocking said arrow, drawing back and aiming to fire......seems ridiculous to me.

After all is said and done, this seems to be a great kit. lots of utility here, even if you only pick it up for bits to add to other projects. Like I said, you cant beat the fig to money spent ratio on these guys.

Maybe I can get a few of these painted and ready in time for the Halloween season!
Posted by Scotty Kahn at 7:36 AM

Places worth the visit 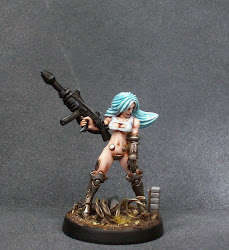 Been there, done that

Buy this guy a paint

Those of a similar mind